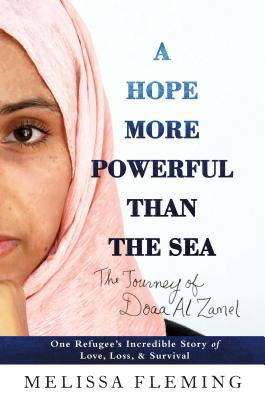 I was very touched by the conversation and so inspired by both the author of the book and the woman she wrote about .

Laura Lynch , Friday host was speaking with Melissa Fleming, chief spokesperson for the office of the UN High Commissioner for Refugees, who shares Al Zamel’s story in her  book, A Hope More Powerful Than the Sea .

Doaa Al Zamel survived four days floating in the Mediterranean sea with the children of strangers in her arms, after the boat she was on sank.

“I still don’t know why they chose me but I was happy because I wanted to help, I wanted to help everyone that was there, but of course it wasn’t possible for me to do that,”

“I was happy when I saw the boat … that I would be saved but what made me happiest was that I would save these children who were my responsibility.” she told Lynch .

“It’s not just a sad and a tragic story, it’s a triumph story. A story that shows so much resilience and so much hope,” Fleming tells The Current’s Friday host Laura Lynch.

Leading up to International Women’s Day 2022, I was reminded of Doaa Al Zamel’s incredible story and wanted to share it with you all .